Bladder cancer is a disease in which malignant cells form in the tissues of the bladder. 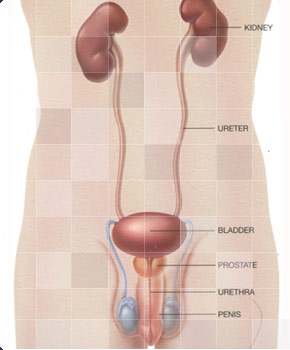 Bladder cancer is a serious type of disease involving the development of abnormal cells within the bladder that rapidly multiply and develop a tumor. Your bladder is an organ found in the lower part of the abdomen that is involved with the storage of your urine until it is safely removed and excreted from your body.

If you have bladder cancer, you may experience symptoms like blood in your urine, frequent urination, pain while urinating, being unable to urinate, or lower back pain. A number of symptoms of bladder cancer are nonspecific, meaning that they can be found in a wide range of disorders. In many cases, people with multiple nonspecific health symptoms do not actually have bladder cancer, but are found to have another type of condition like a urinary tract infection.

The most prevalent form of bladder cancer is called non-muscle invasive bladder cancer, involving abnormal cells that line the interior part of the bladder. This condition does not normally metastasize, or spread, to surrounding tissues, but it does tend to return once it has been treated.

The other form of bladder cancer is known as muscle-invasive bladder cancer. It involves cells located on the bladder’s muscle wall. This type is more serious because it often metastasizes, making it more life-threatening.

Bladder cancer is the fourth most prevalent type of cancer among men within the United States. Men are more commonly affected by bladder cancer, with as many as four times the number having the condition, which represents about 70,000 men and 20,000 women who develop the condition annually.

Cancer develops due to the accumulation of genetic mutations among critical genes, particularly those controlling the growth and division of cells, as well as repairing DNA that has been damaged. The changes that these cells undergo allow them to grow and divide uncontrollably, forming a tumor.

In virtually all bladder cancer cases, these abnormal genetic changes are not genetic and are found only within specific cells in the bladder.

Studies suggest that numerous environmental and lifestyle factors contribute to the development of bladder cancer. Tobacco smoking is the greatest risk factor, with as many as 50% of those with bladder cancer having had a history of smoking tobacco. Additional risk factors include chronic bladder inflammation, some types of parasitic infections, industrial chemical exposure, and long-term use of catheters.

In most cases, bladder cancer is not inherited. Instead, it is typically linked with certain cellular mutations that develop in specific bladder cells within a person’s lifetime.

In rare cases, bladder cancer can be inherited. It is important to understand that those who have genetic factors inherit an additional risk of developing cancer, rather than the actual disease. So not all those who have certain inherited genetic mutations will go on to develop bladder cancer.

Other Names for Bladder Cancer

Can bladder cancer be detected early?

In many cases, bladder cancer can be found early when fairly small and it has not spread beyond the bladder area. As with most types of cancer, early detection greatly improves your odds of having your treatment be successful.

Bladder cancer screening can be used to look for signs and symptoms of this disease. There is currently no recommendation among major healthcare organizations for routine screenings.

The situation is different for those at very high risk of developing bladder cancer, such as those who:

Signs and Symptoms of Bladder Cancer

Bladder cancer is a form that can often be detected in its early stages because of symptoms that cause an individual to seek out the care of a health care provider.

The first indication of bladder cancer is usually blood in the urine. This condition can change the color of urine to pink, orange, or very red in rare cases. In some cases, the urine color may be normal but blood can be detected using urinalysis, or a urine test. This is often done as part of an overall medical checkup for other types of symptoms.

Blood may be evident on one day and not found the next, with clear urine present for weeks, or even months. However, if the individual does have bladder cancer, the blood will reappear at some point.

When bladder cancer is in its early stages, and only confined to the bladder itself, there is typically some bleeding but little to no pain or additional signs.

It is important to note that the presence of blood in the urine does not always mean that bladder cancer is present. It is more common that it is due to conditions like an infection, non-cancerous tumors, kidney or bladder stones, or some other type of kidney disease. But if you experience blood in the urine, you still need to have it checked out by Dr. Antun.

What is a urinary tract infection?

A urinary tract infection (UTI) occurs due to the presence of bacteria within the urine, which travels into the bladder. UTIs result in over 8 million doctors visits annually. About two-in-three women and 12% of men will have a minimum of one UTI during the course of their lives.

What are the symptoms of a urinary tract infection?

If you have a UTI, the lining of both your bladder and urethra become red and inflamed, similar to the way that your throat does whenever you have a cold or the flu. This can lead to lower abdominal pain, and even your lower back, and lead to more frequent urination.

The most common symptom of UTI is pain or burning whenever you urinate. Some sufferers of a UTI may also feel a strong urge to urinate, but only a few drops come out. The reason is that the bladder is so inflamed that it feels like you need to urinate even when you do not actually have to.

It may surprise you to learn that large numbers of bacteria live and thrive in the region around the vagina and rectum, as well as on the surface of the skin. Although bacteria is not normally found in urine, it can get there from the urethra and reach the bladder. Bacteria can even travel into the kidneys. No matter how far bacteria ultimately reaches, it is the actual urinary tract that is causing the problems.

Some factors that increase your risk of developing a UTI include:

Women who have passed through menopause experience a change in their vaginal lining, losing some of the protection provided by estrogen that would normally lower the odds of developing a UTI. There is also a genetic predisposition among some weapon to developing UTIs. Some women have urinary tracts that form in such a way that bacteria is better able to cling to tissue surfaces. Some aspects of sexual activity can also be a factor in how often you get urinary tract infections.

Urinary tract infections come in two forms: simple and complicated. The simple form occurs with healthy people that have normal urinary tracts. Complicated UTIs occur when bacteria is unresponsive to antibiotics or there is an abnormality with the urinary tract. Women typically have simple UTIs, while men and children normally have the complicated form.

If you have a simple UTI, the treatment is normally a course of antibiotics. In some cases, an infection may require longer treatment. Although the urge to urinate, and the pain, typically resolve after a few doses, be sure to still take the full course of your medication to ensure that it is eliminated, even if you are feeling better. Be sure that you are also drinking plenty of fluids.

If you have a UTI and are postmenopausal, a topical vaginal hormone replacement may be helpful. Since this involves estrogen, be sure to have a conversation with your doctor prior to starting any type of treatment, since some women cannot use estrogen due to other medical issues.

Sign up to get the latest news and deals on Urology treatments!